The linear model is equal to an LTU with identity activation function and an extra 1 input feature in chapter 10, so we can use the same gradient descent algorithm to train the LTU.  For MPL, if we use the identity activation function for all  neurons, the whole neuron network is equivalent to a single LTU, which is meaningless. In reality, we use non-linear activation functions so that MLP can simulate any kind of continuous linear or non-liner functions. If there are many layers and every layer has many neurons, it would be hard to write the function expression of the output with regards to the inputs, but we know the function relationship between the inputs and the outputs exists and can be described as composite function. The relationship between the parameters(weights and biases) and the loss function is also a definite function, so we can use the gradient descent algorithm to find the possible minima. Since the weighted sum function is derivable and the activation function is derivable(for some kinds of activation functions, they are derivable at most points), according to the theory of derivative of composite function, the loss function is derivable with regards to weights and biases. But since it is difficult to get the complete expression of the loss function with regards to the parameters, how to  compute the partial derivatives, thus gradient? We must resort to the chain rule of the composite function. For simplicity, consider the following composite function:  \(o_3=\sigma_3(\sigma_2(\sigma_1(w_1)))\), where \(\sigma_1(w_1)=xw_1+b_1\), \(\sigma_2(o_1)=w_2o_1+b_2\), \(\sigma_3(o_2)=w_3o_2+b_3\). \(\frac{do_3}{dw_1}=\frac{do_3}{do_2}\frac{do_2}{do_1}\frac{do_1}{w_1}=w_3w_2x\). If we adjust \(w_1\) according to this derivative, there would be a problem if \(w_3,w_2\) is small because the derivative would be too small to make a change to \(w_1\). This problem is server if there are many layers of neurons( so called deep neuron network), which means the weights in the layers near the input would not get adjusted during training. This problem is called gradient vanish problem. Similarly, if the weights of layers near the output are set to big initial values, the derivatives would be too large for the weights near the input, which is called gradient explosive.

It will generate the following graph:

Now, besides the mul node, a set of nodes calculating the gradient occur in the scope of “gradients”. Double-click the “gradients” scope, you’ll see what is inside: 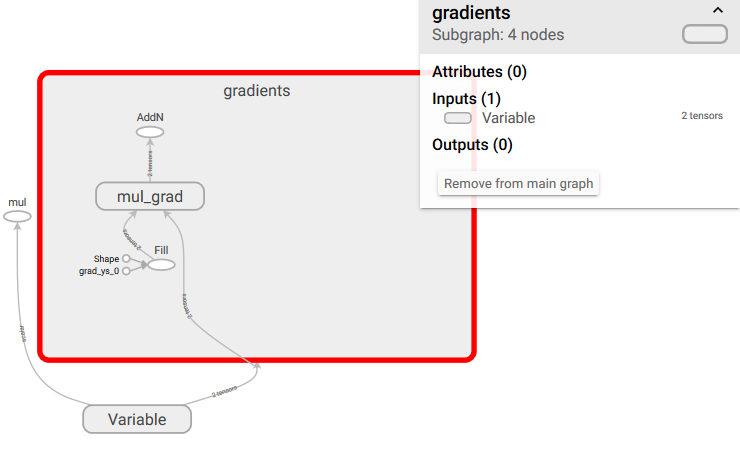 The variable outputs two tensors(scalar x and x) which are multipled by 1 and added together to get the gradient: x*1+x*1=2*x, which is exactly dy/dx. 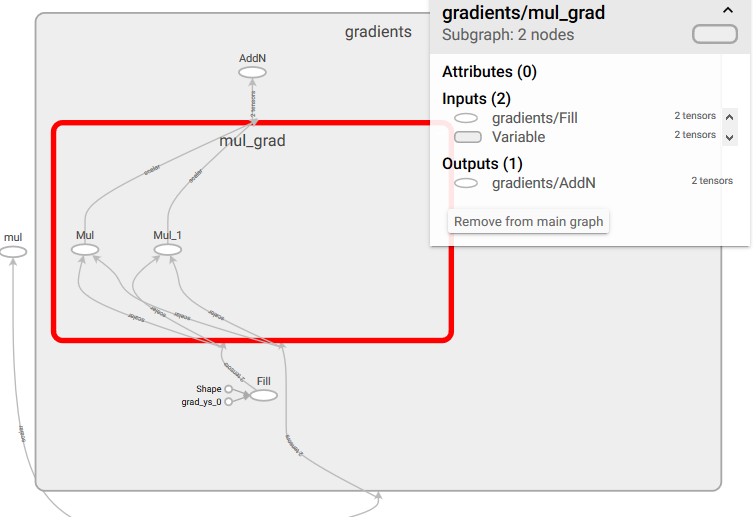 The Fill operation involved in computing the gradient is a little weird. It output a tensor with the “Shape” shape and every value of the tensor is set to the value “grad_ys_0”. In this case, “Shape” is an empty list, “grad_ys_0” is 1, so the output is a scalar 1. 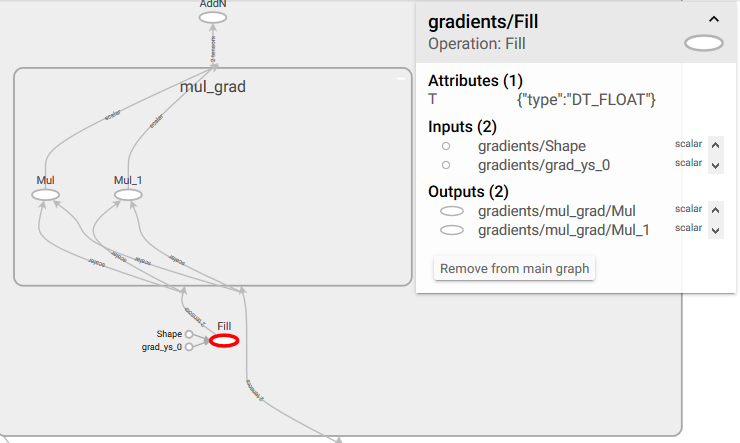 To apply the gradient descent algorithm, you do not even need to call the tf.gradients to calculate the gradient. You can use the tf.train.GradientDescentOptimizer class to compute the gradient and update the parameters automatically for you.

After you call optimizer.minimize, the following compute graph is generated: 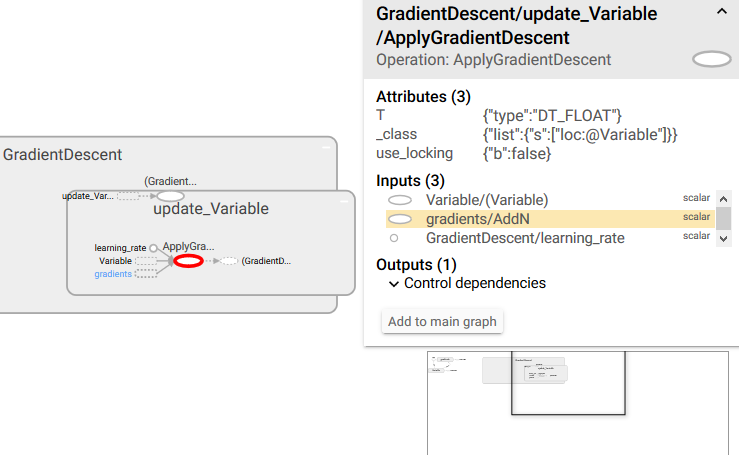 Note that the variable update is done by the ApplyGradientDescent operation. The “GradientDescent/(GradientDescent)” node is just a NoOp which does nothing as the name implies. The “gradients” scope is like the one generated by tf.gradients with a little change: 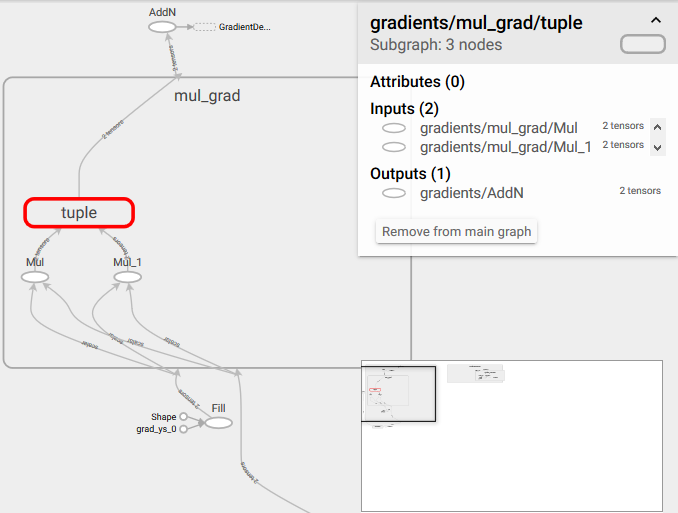 A new scope “tuple” is added using tf.tuple function. This function output the same tensors(in a list) as the input tensors. But it outputs only after all the inputs are ready. 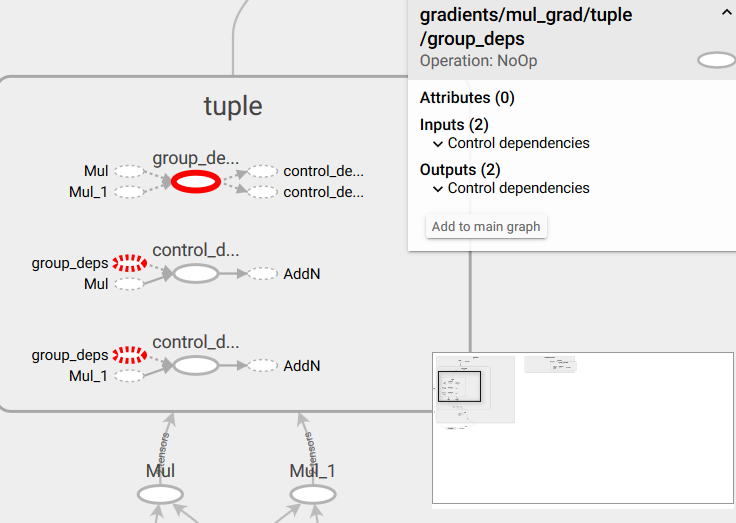 Now you create a NoOp op which depends on op1 and op2. The NoOp operation is executed only after op1 and op2 are executed. The NoOp does not have an output. In fact, tf.no_op returns an Operation rather than a usual tensor object. To output the input tensors, tuple creates two Identity operations, each of which outputs an input tensor. 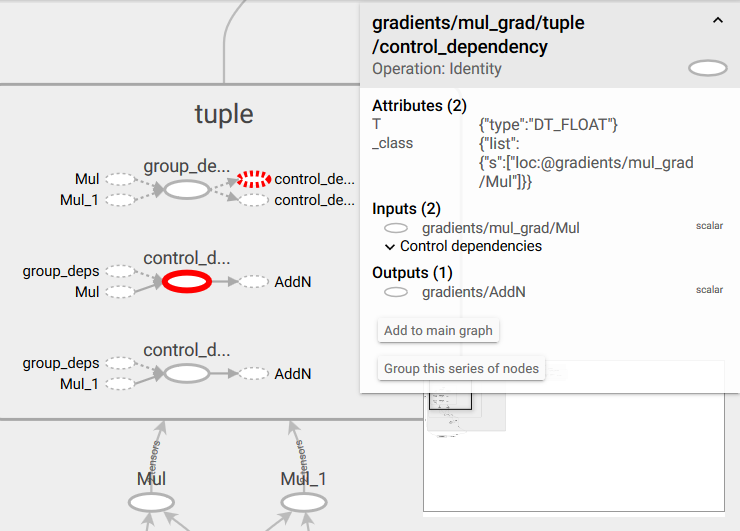 You may get better understanding about the so-called gradient backward propagation, chain rule, etc. by looking at the following more complicated example.

Now the final output z is a composite function of two functions: z=2*y, and y=x*x. Here is the graph: 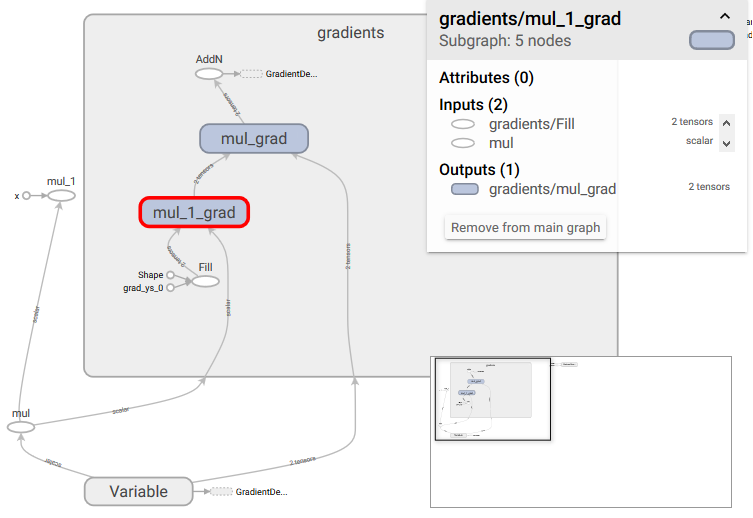 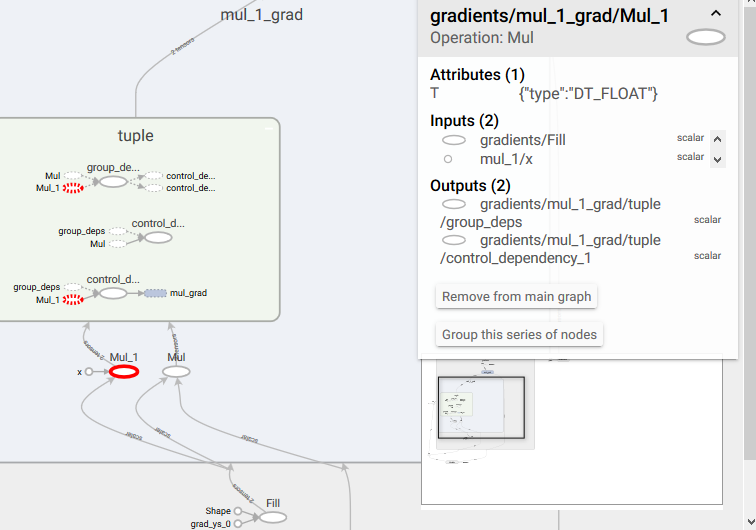 The following is the details of gradients/mul_grad: 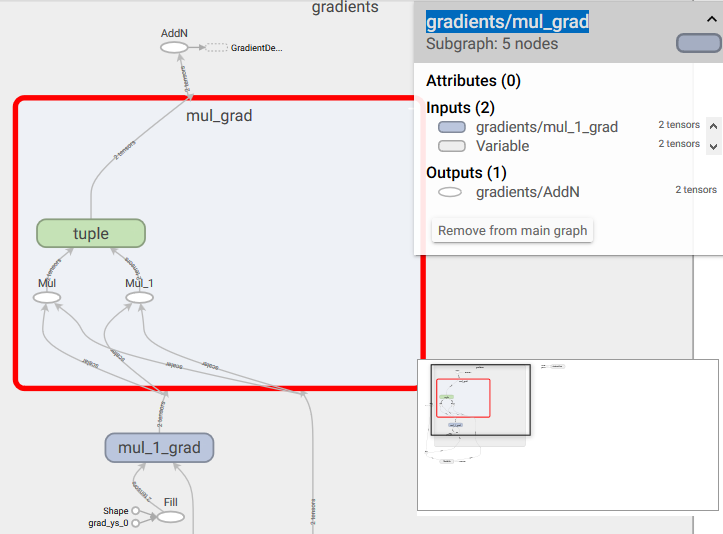 You can see how it computes the derivative using the chain rule:dz/dx=dz/dy*dy/dx=dz/dy*d(x*x)/dx=dz/dy*(dx/dx*x+x*dx/dx)=dz/dy*x+dz/dy*x.

I think now you should understand what tensorflow auto-diff does. It automatically creates computational graph to compute the partial derivatives w.r.t the parameters(variables) that affect the loss function.

The selection of activation function is also important. Sigmoid activation function will saturate when abs(input) is large. At that time, the gradient of sigmoid function is close to 0, so the final gradient in previous layers would be close to 0 too. Relu function is better for large input because it will not saturate and its derivative is  constant 1. But when the input value is negative, the derivative of ReLU is 0, and the weights of the neuron will not get adjusted any longer and the output of this neuron will be 0 forever. This is called dying ReLU. You can use the leaky RLU max(ax,x) instead of the strict ReLU to avoid this problem.

At the beginning, momentum optimizer is exactly the same as ordinary gradient descent optimizer: adjust the parameters by a fraction(learning rate) of gradient. But later, the adjustment step itself is adjust larger and larger by adding the current  fraction(learning rate) of gradient. This is reasonable and like the greedy algorithm: if gradient continues to support the adjust direction, why not go further with a larger step? If gradient does not support later(gradient changes its sign), decrease the step then.

Don’t move faster along a larger gradient component unless multiple past history of this component vote for a larger step along this dimension. This can alliterate the problem stated at the beginning of this post: gradient descent algorithm proceeds slowly along little component of gradient.

We are the same as AdaGrad but we focus on more recent history while AdaGrad look at all history of a gradient component.

Evaluate the model every 50 steps on a validation set, save the model if it performs better than the previous saved model. If no better model is found in 2000 steps, stop training and use the last saved model as.

You send the input or the output of a hidden layer to tf.layer.dropout with a drop rate p. During training, the input/output of hidden layer has the  probability of being set to 0(dropped out), and the remaining inputs/outputs of hidden layer are divided by the keep probability (1-p), which means the connection weights keep at the same level of training a full DNN. Without scaling the remaining neurons by 1/(1-p), the resulting weights would be 1/(1-p) larger than usual (full neurons) which won’t perform well during prediction.

Dropout makes the network not affected too much by any nodes in the network, thus alleviating overfitting.

After a (batch) training , you want to constrain the weights so every row of the weight matrix has a norm less than r:

tf.clip_by_norm computes the norm for every row of weights, if it is less than threshold, do not change it, otherwise, let \(w_{i,j}=w_{i,j}*threshold/norm(w_i)\). Anything variables can be max-norm regularized. Just pass a regularization function to the function that creates the variables like:

The max_norm_reg is called by tf.layers.dense to define the graph for normalization, which takes the the “kernel” parameter(the weight matrix) as its input. You need to expose the tensor to evaluate the graph into a collection. When it is time to normalize the variable, the tensor is evaluated.